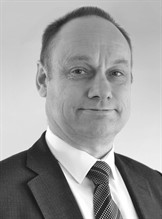 The Board of the Rail Freight Group (RFG) is pleased to announce that Ken Russell has been elected as its new Chair in succession to Tony Berkeley who formally retired at the Group’s AGM on 7 November.

Ken is a director at Russell Logistics and has been a long-standing supporter of the RFG, both on the Board since 2015 and as an RFG member since the start of the Group.

He said: “I am delighted to be taking up this role. It has never been more important to promote the benefits of switching goods to rail and I look forward to helping grow the RFG’s membership and strengthening our community across the sector.

Neil Sime, Managing Director of Victa Railfreight, has also been elected to the new role of Vice-Chair. He has been on the board since 2003 and a tireless supporter of the sector.

Under a new process agreed by the RFG Board, Ken and Neil will serve as Chair and Vice-Chair for a 12-month period. The election for these positions will take place each year, with all qualifying Board Directors eligible to stand.

RFG is also pleased to announce that Chris Swan, Head of Rail for Tarmac, has become a Director of the Board, being appointed at the AGM. Maggie Simpson, currently Executive Director of RFG, has been appointed to the role of Director General, and will continue to lead the RFG in its work.

Maggie Simpson said: “I am delighted to welcome both Ken and Neil to the new roles. They both bring with them years of experience in the rail freight and logistics sector and I very much look forward to working them.”

Tony Berkeley formerly stood down from the role at this year’s AGM, held at the Port of Sunderland on 7 November. He will continue to work for RFG as European Advisor until the middle of next year.

Kenneth Russell has over 35 years’ experience within the Russell Group. Director of Sales & Marketing since 1995, Kenneth holds comprehensive knowledge in logistics, including distribution, rail freight operations and warehousing. From his wealth of experience in the industry, Kenneth has been instrumental in the design and structure of key logistics contracts managed by the Scottish based group.

The Russell Group owns and operates a substantial fleet of vehicles and containers, and is one of the UK’s top independent rail terminal operators. Bonded warehousing and contract packing are also significant elements of the business, as well as vehicle maintenance, container leasing and self-storage. A combination of these in-house capabilities enables Russell to manage end-to-end supply chain contracts for some of the world’s strongest brands.

Membership and appointments include: