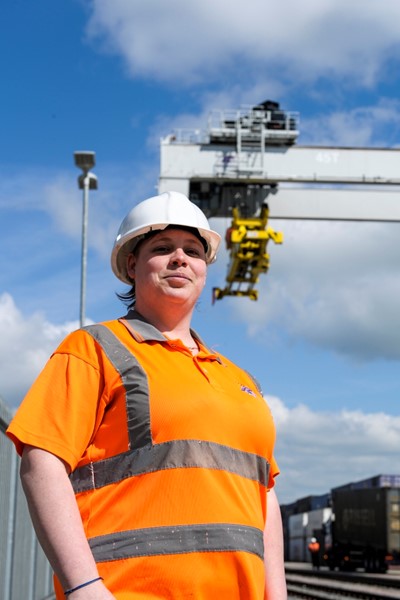 Before I started here at Russell...
I was a Prison Custody Officer at HMP Rye Hill, where I spent time working in the Prison wings, Visits and the Night Shift.

I started working for Russell...
when they opened the site here at Daventry, July 2015. My current role is Rail Administrator. This involves using Depot-Pro to book in/out containers and drivers. We create train manifests and liaise with TOPS, Crewe; also we generate reports, order stationery as well as other administrative duties.

The changes that I have seen since we have begun... are that the RTG cranes are now fully operational. We have changed rail operator from DRS to Freightliner.
Also we have a new Depot-Pro system up and coming.

I enjoy... the friendly atmosphere and the togetherness of all the staff at Russell Daventry. We all know the job so we pull in the same direction. It’s great that we can work with other departments so closely as well.

I think I decided I wanted to be an RTG operator... a few months after starting at Russell Daventry. I applied for the role through an internal vacancy. I was actually on holiday when the email got sent out. A colleague phoned me and told me about it and I managed to apply whilst being away. I’m lucky to have such great work colleagues otherwise I may have missed the opportunity.

My training involved... some classroom based activities followed by hands on experience operating the RTG; obviously under the watchful eye of the instructor. The assessment will involve a 30 minute written exam followed by an hour and a half practical.

My new role will... bring about more flexibility within the teams as well as more holiday cover overall as I will be able to cover both the admin desk and the RTG.

I have a lot of hobbies... I enjoy reading, playing sports, astronomy/science as well as engineering.

A lot of people don’t know that... I (alongside some family members) own a full sized diesel locomotive. We hope to be touring with the loco around the UK heritage railways later this year.

If I didn’t have to work... This is a tough one. I would probably get a farm/small holding or volunteer working with animals.